The high end, high-protection fencing mask you have been waiting for. The integrated overlay and back of the head protection offer higher than average impact resistance and force distribution. Internally the suspension is tough, and there is more padding than a standard fencing mask. The rear of the mask opens to allow you to slide your head in, then closes back up to fully envelope the head.

The hits to the plastic are a little more noisy than being hit on a padded overlay, and there is obviously less ventilation. In our testing, this is a small price to pay for the increased protection. Plus you'll look like one of those TV bad guys! ;)

Sizing: Measure around your chin, in front of the ears, and straight over the top of your head, full circle. If you're in between sizes, we recommend going with the larger size. Internal pads are designed to be removed if you cannot squeeze into your given size.

Enough said.
I got this mask as a ridiculous impulse buy. I had nothing better to do, and I needed a new mask that could take a bit of a beating for both normal sca fencing and cut and thrust. This *thing* came in a huge box.
I felt intimidated looking at this mask. It looked like a cross between the Juggernaut and some sort of giant space insect. I’m a relatively tiny lady standing at 5”3 with a small frame, so this mask looks huge on me without my hood on.

Sooo much plastic, but I wear my linen hood over top to cover it up and make it pretty.

Pros:
- your peripheral vision is GREAT, you see everything around you
- it’s not too heavy
- it’s lightweight and can take a beating
- you can actually hear things while wearing it!
- it’s not as hot as people claim for it to be, I was quite comfortable in it

Cons:
- you look like a giant space bug
- putting it on makes me feel like I’m putting on a bra on my head backwards
- lots of plastic can make the helmet unsightly

I got soooo many compliments on my helmet. I fought two tournaments with it on so far after boarding a plane and flying with it in my luggage. It takes a beating and keeps going. Absolutely no regrets.

So far this has been a great helmet it's a pound and a half lighter then my PBT, even though it has a bit more bulbous shape it doesn't seem to get pushed back from a thrust rather the thrust angles off the helm. Blows to the sides and front feel lighter though it is rather noisy, also on that note it is a bit harder to hear, but I feel the extra attention to padding makes up for this. It's alot warmer then a standard helmet but everything's a trade off. The fit is leaps and bounds better this is the first fencing mask that actually moves with my head the bib stays tight to the jacket providing a higher degree of saftey while the back the head protection does the same this is a fantastic product in my opinion. My only complaint so far is ventilation. If anything changes I will add to this review.

W
Will Landis
This mask is great. Safest thing out there.

I've been using this mask for a couple weeks now. Here are my accumulated notes:

- It’s built like a brick sh!thouse
- Perhaps most importantly for concussion protection, hits tend to glance off this mask extremely well. so rather than a blow landing on a padded overlay and sinking in, they mostly just hit and deflect or slide away. I didn't think about it before noticing this effect, but this is probably one of the biggest safety features of the mask.
- I don’t know what you’d have to do to get concussed in a wukusi but they would definitely kick you out of the zoo for whatever you did to get a rhinoceros to charge you.
- It has neoprene (or similar) padding between the plastic and the fencing mask, AND more padding between the mask and your head.
- I don’t use a regular overlay (I have always used a rugby cap and back of head) so I can’t rightly compare it to the padded overlays, but it’s warmer than my usual leather back of head. But that doesn’t tell you much. I would probably say it’s about the same as a padded leather overlay with good coverage.
- It’s loud when you get hit, but that actually wasn’t that big of a deal really, when fencing. You can hear decently well in it, for not having ear openings.
- It has a removable chin pad that I took out because of fit and because it covers the moth a bit and I didn’t like breathing in my exhale. But they could also just be trimmed a bit.
- It’s about an inch and a half wider and an inch taller than my Gajardoni mask WITHOUT an overlay. So about the same as a mask with an overlay on.
- Very solidly built. Once I got it adjusted I found it quite comfortable. The only thing I’m still dealing with is that I need to wear like a sweat band or rag or something with it because I’m used to the rugby cap diverting or absorbing sweat, so without that I’m sweating in my eyes a bit. But that’s a me thing, not a mask issue.
- It has an FIE triple strap which is a lot for us, but I’ll get used to it
- Sizing is pretty accurate. You could take out a little bit of padding and use a smaller size and still probably have a lot of protection, but I went by the size guide, and it seems to fit quite well.
- After measuring, the large Cobra is larger than my large gjardoni mask, without an overlay. It’s about an inch taller and about an inch and a half wider. But that measurement is without an overlay, so fencers who use an overlay would have pretty similar sizing.
- I read something somewhere about the bib being short. The gajardoni and AF bibs are 4.5” long. the cobra is 4.75” long, so its actually slightly longer.

Also, aside from the mask, SoCal Swords shipping is always super fast, so I had the mask a couple days after ordering, even from across the country. Not so much a perk of the mask, but credit to the company, for sure. 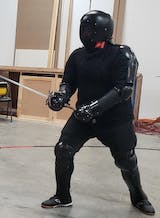 I saw preliminary information on this helmet and after reaching out to Wukusi I found SoCal Sword was the US supplier. My initial experience with the FAST response to messages from both Wukusi and SoCal Swords made a very positive impact, even though SoCal Swords was in the middle of updating their online store. Once the ordering was available in the updated store, the order was placed, and it was received very quickly! When the helmet was received I gave it a good look and was impressed with the overall build quality ... wearing it was a completely different experience from any other HEMA helmet I have used! It provided FULL head protection which was tested with full force longsword blows on the mask screen, top of the head, side of the head, and back of the head. The net effect was far less than a traditional HEMA/fencing mask and visibility was a full 180 degrees while the helmet remained firmly in place. A few others tried it out as well and are now complaining that nobody has them in stock - it makes me feel fortunate to have been in the one of the first shipped out by SoCal Swords.

I cannot say enough GOOD things about this helmet and is value!

Leather Back of the Head Protection